The FireEye threat prevention platform delivers multi-vector threat intelligence and partner interoperability to create a cross-enterprise protection fabric that stops today's cyber attacks. The FireEye platform enables rapid detection, validation, and response to cyber attacks that are increasingly sophisticated and successful at evading current defensive technologies. The FireEye platform has been purpose-built to counter today's cyber attacks and supplements security defenses, such as traditional and next-generation firewalls (NGFW), IPS, anti-virus (AV), and gateways, which can't stop advanced malware. The platform is formed by these core components that work in concert: 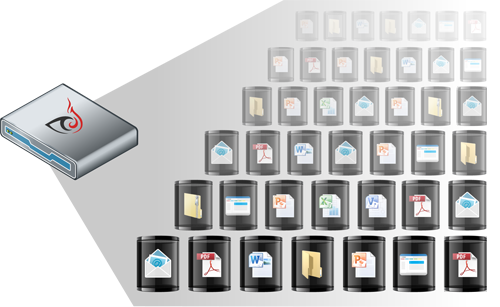 The core of the FireEye platform is the patented MVX engine, which provides dynamic, signature-less, and virtualized analysis of today's advanced cyber attacks. The MVX engine can be deployed across attack vectors and detonates suspicious files, Web pages, and email attachments within instrumented virtual machine environments to confirm a cyber attack. After confirming an attack, the MVX engine also dynamically generates threat intelligence about the indicators of compromise specific to this attack and the targeted enterprise. This intelligence is multi-vector in nature and in a standards-based format, which enables the intelligence to be correlated and shared among the entire FireEye deployment and partner ecosystem for automated validation and protection against today's cyber attacks.